Ahem
The children have all been achieving great things this month, and Ella in particular won a very prestigious regional award, the Young Women in Public Affairs Award of the Zonta International Foundation, which seeks to advance the status of women worldwide and which honors young women who demonstrate a commitment to leadership in public policy, government and volunteer organizations. Alli, Gwen and I went to the swankiest hotel in Basel (Les Trois Rois) to watch Ella receive her award and to hear her appropriate and well judged speech of thanks. This was in the middle of her IB exams for which she has studied diligently despite the competing demands of Facebook, Skype, email, Eastenders and YouTube. She finished her exams and flew off to Magaluf (which Wikipedia is currently calling Shagaluf, I can’t think why) in Majorca with the rest of her grade to spend a few days there before her graduation on 1st June.
Gwen was selected for a track and field prowess of which I had until then been completely unaware: the discus and the shot-put. She went to Munich for a few days to perform these feats and returned having helped the school to a creditable 4th position out of 11 for the competition. This was repeated a week later in Zug, where the school came 3rd overall, and in Bern, where the school won outright. She also went with the rest of her grade to the open air museum at Ballenberg, where scenes of historical Swiss life are depicted in outdoor settings. Jessie celebrated her 20th birthday in Brighton, and had a memorable fancy dress party, in which she dressed as Jessie from Toy Story. She also performed well in her term essays, surprising herself by getting results in her law assignments that were well above average. Notwithstanding, she has applied next year to switch her studies from Law to International Development and Geography, for which I sense that she will have more enthusiasm and energy.
An unusual bird, the Black Redstart, took up residence in our porch and made a nest there some time ago, hatching chicks a few weeks later. This is a likable and companionable bird that makes a clicking noise whenever we appear on the porch. Our hens are still producing eggs although one of them was broody for a few days and mooched around listlessly, pecking in slow motion and looking absent-minded. Four eggs a day is the production average but we never build much of a surplus. I had a lightning business visit to Cambridge to look at ways of monitoring the social media, discovering as I did that the social media is best explained by references to plumbing than to semantics. I had dinner with my work colleagues at a Thai restaurant on the edge of Parker’s Piece while local teams played cricket with hearty British gusto in the failing light. Alli and I went to a ISB 12th grade parents party at Paddy O’Reillys and had a great time, meeting Ella’s boyfriend Louis’s parents for the first time, and getting to know and like some of the parents just a bit too late. We also welcomed our friends the McCoys and the Barnes to a barbecue. From them I picked up vital tips about my vegetable garden and the health of the chickens.
The swimming pool temperature has managed to get above 20 degrees after several days of very warm weather, so Gwen and her friends have spent a lot of time in it, especially at weekends. Even Alli and I have managed a swim every now and then. We are now eating a lot from the garden: lettuce, spinach and rocket mostly, but we will soon have beans, marrows and tomatoes and many wheelbarrows’ full of cabbages, as I created a new vegetable bed from some hassocky land and found space only for my burgeoning cabbage plants. So now there’s a cabbage patch to accompany the chicken run and the compost corner.
So, altogether now, Plant that Bell and Let it Ring!
Lionel 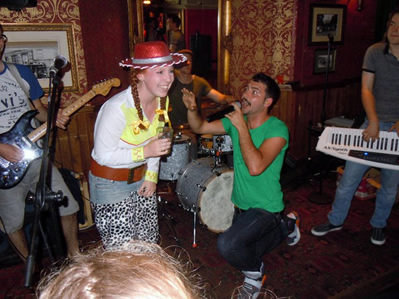 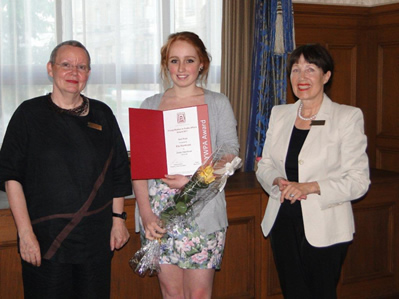 Ella’s award from the Zonta Foundation

Ahem The first few days of the month of July[...]