There are no second hand markets in Abidjan: no Petticoat Lanes or Portobello Roads. There are no marches aux puces and no charity shops. There are no municipal dechetteries or council dumps, unless you count the random rubbish piles scurried only by rats because the rubbish, such as it is, has no use whatever. None of it can be eaten, worn, used or consumed. The wood is already too rotten to be used; the clothes are too threadbare to be mended; the food is beyond poisonous, consumed only by bats. By contrast, any items that could still fulfil a function even when damaged or broken, such as furniture, clothes or other items, are very expensive here when sold second-hand by comparison to developed countries, where there is a far greater tendency to throw away used but usable items and expect them to be cheap to buy. It is a simple irony that illustrates the crushing impact of poverty. It explains why street-sellers’ stalls are so rickety, why cars that properly belong in junkyards still clank their clattering way along the roads, black smoke billowing out from their exhausts. Every second-hand car is a rattling collection of different spare parts that are not quite the right ones but will keep the car going for a while. People hoard broken televisions, AC units, compressors and shock absorbers as they have value if mended. Almost everything remotely usable can be used as barter or currency. And if not, it becomes the authentic zero-level detritus of the city.

The hopeless, endless penury of so many people (most of whom are so endlessly positive, honest and friendly) explains why a large majority of younger people in Abidjan, according to reliable sources, would emigrate to Europe immediately if they just had fifteen hundred dollars. This is the average price for a passage to Europe on a rickety boat or dinghy from the African coast, with no assurance of safety or even survival. This means that if the proportion of young people in Abidjan desperate to emigrate is as high in other African cities and countries, then Europe (and everywhere else that is not Africa) can potentially expect to have to deal with hundreds of millions of desperately poor African emigrants looking for work over the next few years. It’s a desperation passed down by generations of poverty and sharpened by a couple of decades of globalized media and communications. Africa, so full of genuine promise and enterprise and so lacking in money and influence, is struggling to avoid lapsing back into international economic and commercial servitude, even while their populations tune into Life with the Kardashians on cable TV. It’s why the message of international organisations such as the UN, the World Bank and others that Africa should urgently be assisted with investment is so important. The need for concessional development aid is all but over, and was probably never necessary beyond mitigating the effects of famines, wars and civil conflicts. For the economic transformation of this proud and dignified continent with 17% of the world’s population (26% by 2050), no more is needed than the investment of 1% of the value of all the funds around the world, whether sovereign, pension, insurance, private savings, deposit or illicit, currently running at an all-time high of just under $100 trillion. Much of this money earns low returns, dwarfed by the value-added dividends potentially available from modernizing African agriculture and infrastructure. Treating Africa as a big fertile field of promising investments rather than a dusty begging bowl for humanitarian aid would allow it the opportunity to develop and prosper, keep its young people from leaving the continent, balance its trade, pay back on the investments and take its rightful place at the world’s table on equal terms. The alternative will soon usher in a humanitarian disaster of enormous proportions.

I went for a week to Kigali in Rwanda, land of a thousand hills, a country that is winning friends and commercial investment just 24 years after a government-directed genocide caused the deaths of nearly a million people in just three months, mostly by men with machetes, on top of hundreds of thousands of other murders in the years leading up to the bloody climax. Rwanda’s progress since then demonstrates that peace and economic development can be attained anywhere in Africa with faith, confidence and trust. Unlike on my last visit, I had some leisure time and visited the Kigali Genocide Memorial Centre. I urge the experience on all those who visit Rwanda. The capacity for inhumanity of humanity must always be remembered, as well as in the Holocaust, slavery, and many other genocides and mass atrocities spinning back into all the black holes and dirty corners of history. Rwanda’s national reconciliation since then seems a miracle, and I noted with interest that this owes something to the Gacaca trials system, a unique mixture of restorative and retributive justice. At a completely different level, the country requires all its citizens to pick up litter for one morning every month, and I have seen it in action. Kigali at least (since I did not get further into the country) is clean as a new pin and has no litter. Unlike Abidjan. 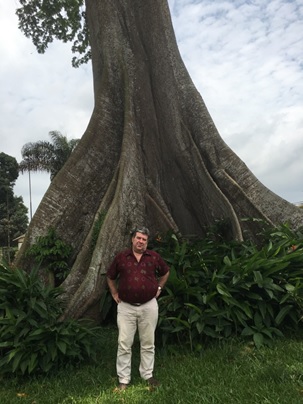 I went with some friends to Bingerville, now a suburb in the Abidjan sprawl. In French colonial times it was the capital of the Cote d’Ivoire and features a large and lush “botanical garden”. Much of it was turned into an arboretum and hunting grounds when it became the grace and favour of the first French governor, Louis-Gustave Binger. The residence still stands, a palatial building built at the height of the colonial era over a hundred years ago. We had a long and delicious lunch at Chez Francois, a restaurant next to the botanical garden, bordered by some gigantic Fromager trees and perfect for a memorably relaxing Sunday afternoon, which put me in mind of home.

Yours from the arboretum,

Ahem Ella graduated from school at the beginning of the[...]

Ahem The fortnight before our extended Christmas vacation in New[...]