My parents-in-law Laurie and Kay paid us an extended visit on their way back from Austria, following a flying visit a couple of weeks earlier. Both Alli’s brothers live outside the UK; in Luxembourg and in Austria, their locations providing the shape of Laurie and Kay’s itinerary at least once each year as they make their way around the continent visiting their children, in-laws and grandchildren. Laurie once again went around the house and garden methodically performing a large variety of tasks and chores that I have never been able to get down to myself. We also went out twice to dinner together, the first time also with Jessie and Gwen at the Trianon in St Louis, and the second time also with Gwen at the Boeuf Noir in Hesingue. Alli, her parents and Gwen also went with our friends the Barneses to a lunch, wine tasting and tour of Chateau Wagenbourg, producers of excellent Crémant d’Alsace. After Laurie and Kay’s departure, we also all went to the Couronne d’Or in Leymen to celebrate the end of Ella’s final term at University. I have spent much of my spare time in the garden, transferring seedlings from the greenhouse to the vegetable beds, which I had replenished with thirty wheelbarrow loads of soil from a mountainous pile in my neighbor’s garden. Safely growing in the garden now are several different varieties of lettuce and tomato, Swiss chard, Brussels sprouts, courgettes and chili peppers. I also redesigned the chicken run to allow me to work more easily on the vegetable garden. 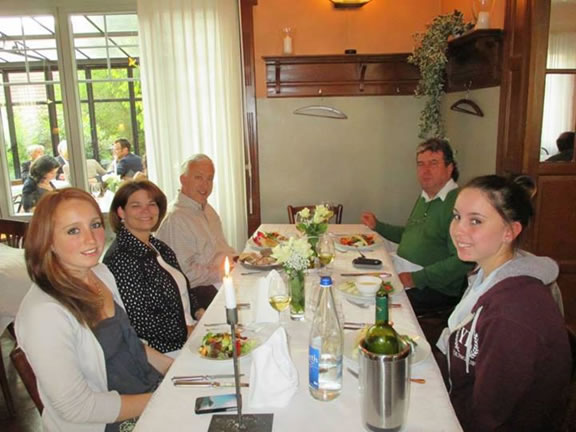 Ella, LeAnn and Jasper Barnes, Lionel, Gwen at the Couronne d’Or, Leymen, May 2014

After staying with us for a few days, Jessie left just before her birthday on 9th May to rejoin her burgeoning social life in Brighton, centered on the sport of Ultimate Frisbee, growing fast across the world’s campuses. Her Masters year is coming to an end and she will be graduating in January after spending another few weeks in Bangladesh. Ella came to see us immediately following the conclusion of her exams and her university career. Her results will be published in the next few weeks and she will be graduating around the time of her 21st birthday on 20th July. We are looking forward to celebrating with her in England just before we begin our holiday in the south west of England. Ella learnt also that she has a full-time job when she leaves college, in the HR department of Loughborough University. Her boyfriend Sam landed an excellent job as well, in London with a top six accounting firm.

I spent eleven days in Italy and south west France, starting with a few days attending and presenting at a conference on the edge of the Lago Maggiore at Belgirate, just a couple of kilometers along from Stresa. After the conference I drove unhurriedly to Turin, where I saw the Shroud, returned from its World Tour following the discovery through radio carbon dating that the acheiropoieton could not have been the shroud of Christ, but that of someone from the 13th or 14th century. The route then took me across the Alps to Avignon and then Toulouse and finally to Mansonville, where I met the French people who were going to rent La Hune from me. For a few days there before the contract was signed in Valence d’Agen, I was hard at work throwing out or putting into storage most of our possessions including a lot of my parents’ old belongings, furniture and kitchen equipment, as well as children’s toys (every single one had its own memory), keepsakes and clutter.

The whole visit seemed rather like a last pilgrimage, a rite of passage, with its long drives, big skies, lay-by lunches, group farewells, a ritualistic clearing of the emotional circuit board of the past. But La Hune, long the final repository and resting place of items that we should really have been throwing away rather than keeping, had become a type of all-too-familiar curiosity shop, full of memories but lacking visions. It will all be different when the house becomes available again, as it will be renovated, insulated, heated and repainted throughout, with polished floorboards, large halls and huge, bulbous calm, straight smooth Corbuséenne lines, deep dark carpets and a styled garden surrounded by lavender, hollyhocks and laurel. I drove back at the end of the week, completely exhausted, laden with curios, dusty bed linen, books and rusty bikes.

Back home I rededicated myself to my diet, and with relief at the clear signs of improving summer weather, started cycling in regularly on my revived bike to work in Basel.

Yours pinging from the handlebars,