Alli’s 50th birthday took place amid a maelstrom of memorable events and in an oasis of hot and sunny weather. After considering and eventually rejecting as unnecessary my annual offering of revitalising cream, my two really big secret surprises, nurtured for several weeks, came to fruition despite weeks of warnings from Alli that she did not want any surprises. Firstly, during the morning an inscribed stone birdbath appeared in the garden while her feet were tucked behind her ears in a Pilates lesson. It was hewn from a hunk of South German limestone and was something I knew she wanted but would also not have expected. We all went that same evening to the well-regarded Auberge de St Laurent in Sierentz, after a champagne apero and some very thoughtful presents from the girls.

The next morning announced a hot day and Alli told me how much she was looking forward to some serious rest and relaxation by the pool. I literally hugged myself at the contemplation of what was to come. No sooner had she taken off her top, Duchess of Cambridge-style, and assumed her languorous position on the sun lounger, complete with book, iPad and radio, when up the steps from the drive to the garden bounded four of her best and oldest friends: Laurence, Sophie, Anne and Claude. They had gunned it four hundred miles from Brussels to see her for the weekend. She was overjoyed: “Now that’s the kind of surprise I like!”. And they were ready to party; so we stepped up a gear. We went straight from lolling in the pool to La Couronne d’Or in the village that evening. Alli was updated exhaustively with the Brussels news, views and gossip from and about all those with whom she had grown up. Scarcely without pausing the next day, after our Belgian friends had departed for Brussels, just as merrily as they had arrived, we went on to an enjoyable Paella party in the sun at the Daubneys of Oltingue.

Ella’s boyfriend Sam came to visit, and after some sight-seeing in Basel they both left for a few days of luxury in southern Spain with Sam’s parents and relatives, just as the weather abruptly changed to a kind of rumbling pre-autumn. I gave up on the vegetable garden, which had become an hopelessly overgrown slug-ridden jumble due to my sudden inflow of urgent freelance work, and so we had the whole thing cleared in a day. There had been a complete failure of the tomatoes, salads and broccoli, but some good large pumpkins, courgettes and beetroots had been produced from the patch. We went to our friends the Barnes of Biel-Benken for a memorable meal featuring great company, fine wines, liquers and an exceptional rack of roast lamb. The evening ended in dancing to 1960s Motown booming from the cellar. (We just couldn’t help ourselves). Talking of dancing, I joined the local Morris dancers, the Ferrette Morris Men, for an introductory evening. I had been threatening this for years. What made the difference is the late realisation that I will never look cool while dancing, so I might as well be uncool properly. It would also give me the perfect excuse to drink more beer and grow a pony-tail. However, having not used my jumping-on-tiptoes muscles for decades, the exercise left me hobbled. I hope to be able to walk before I go again.

I drove Ella to Loughborough to help her into her new house and her second academic year with a car-load of her possessions via Dieppe, Newhaven and entertaining stopovers in Burgess Hill, Battersea and East London, the last to visit the Locks and Tallises of Forest Gate and watch West Ham mess around for a dismal 1-1 draw at the Boleyn. I also saw Jessie in her new Brighton digs (starting her third year at the University of Sussex) and had lobster Thermidor with Debbie at the Gazette Brasserie in Battersea. Having driven back from England with no less than 23 Amazon packages, I felt like St. Niklaus as I unpacked at home. The inaugural edition of The French Letter for Leymen, a local newsletter initiative pioneered by me and my friend Martin, was put together with an outpouring of help from Martin’s wine cellar one evening for the Anglophone residents of Leymen, who make up nearly 8% of the village’s total population. It was subsequently, and very Englishly, pointed out that our title page had the tricouleur in the wrong colour order. I knew we should have just gone for a drawing of a capot anglais. The month ended with a good evening at the Comedy Club in Basel with Simon Day and Tom Craine, and an excellent dramatic offering from the Half Circle, a series of plays with red thread entitled Duplicity, of which Jerry Springer is God was a particular highlight.

One morning as I was walking Bonnie around the fields with a light summery breeze whispering, a blue sky and the warmth of sunlight on my face I had one of those definitive moments when I suddenly realised that Life Gets Better. It’s difficult to explain adequately this sudden feeling of unsubstantiated contentment but it’s true, despite the arthritic knees and hips, the false teeth, the headaches, the black dog, the stomach overhang, failing eyesight and hearing, incontinence, sleep apnea, and the club foot.. still.. 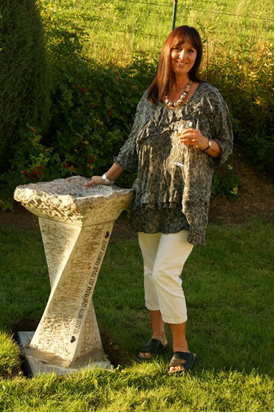 Ahem I’ve been busy. My mother occasionally used to say[...]

Ahem March is a great month, known in Finland as[...]