I was looking northwest across Basel from the Hinterhof Dachterrasse, after being prompted to view the sunset. There were several tall cranes cornering building sites and some jagged rectangular office blocks with golden windows but I had to agree that a great sunset makes almost any urban (or rural) view look good, and the Basel region together with the rural south Alsace offer many of the best sunsets I have ever seen. I had parked my car in a large car park opposite before attending the end-of-summer event of the social club (EnglishSwissTalk) that I help to organise. There have since been, as on that evening, some very summery evenings in the past month and these always go well with a few drinks on a roof terrace with friendly and interesting people.

A few hours later I was looking pensively at my car now hapless and solitary car stark among the abandoned lots behind the unexpectedly closed gates of the Alcatrazian car park. I had no taste whatsoever for the adventure of a long and expensive midnight taxi ride from central Basel back to Leymen. So I determined on a crafty break-out. It took me a few minutes of cruising silently around the perimeter of the car park to check for any negotiable gaps and I eventually found one using some lateral thinking. There was a tiny gap available if I was to drive carefully enough sideways across the three entrance lines bays just before the pay machines and negotiate a perilous way across, up and down three large curbs parallel to the barriers. I actually had to measure the gap by hand before deciding to do it.

Crawling forward, with the right wheels on a raised pavement and the left on alternating waste ground and high curbs, I drove as if the car was a tanker docking in a small port, and managed to get through with no more than a few millimeters to spare on either side (I had become convinced that the whole car park would shriek electronically Psycho-style in widespread alarum if I had touched anything as I squeezed through). The whole exercise took me nearly seven minutes to go ten meters, but it proved that desperation for escape makes for sober focus. I would have loved to have seen the incident on a security camera (and I may yet, accompanied by a giant fine for daring to extract myself irregularly if non-violently from a Basel car park). I think still of Steve McQueen atop an Enfield with mumble-rumbling choke, testing the length of the steel fence of the prison camp, then gunning it over the enclosure to freedom and stardom.

Alli’s birthday was celebrated at our local restaurant L’Ange, then again with LeAnn and Jasper who came round the next day for drinks in the garden. Alli seems to look younger and more beautiful every year, in ever greater contrast to my haggardly baggy mien. Meanwhile, Jessie came over to Basel to stay with us for a few days before she departs next week for her full time job in Dhaka, Bangladesh, having already sorted out all her tax and health insurance and found a magnificent flat near her place of work. Ella has enjoyed the first few weeks of her job at Loughborough University and is doing a course with the CIPD (the HR equivalent of the ACCA for accounting). She has also applied for the UK Civil Service Fast Stream for next year, and has had her application accepted to run in the London Marathon next April. (My own marathon runs were halves and in the 1980s). 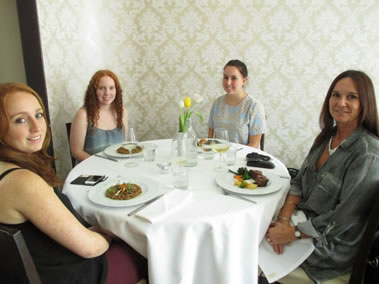 Ella and Jessie took Alli and Gwen to a birthday lunch in Brighton on the first of two successive weekends that Alli and Gwen went to the UK for shopping and educational reasons while I stayed at home doing some clearance work in the garden, spending hours cutting back bushes, brambles and hedges, and visiting the green dump in the village at least ten times. Gwen has undertaken another paid photographic commission and has been going regularly to the gym and is cycling to and from school. Next week she will be going on a school working trip to South Africa. It’s amazing to think that we have now been in Leymen, France for the same length of time as we had spent up the road in Oberwil, Switzerland, where we first arrived in this wonderful region just over a decade ago. Last weekend was made much more sociable by a delightful Anglo-Swiss-French christening in the village church, and a friendly celebration afterwards with local friends on the sun-warmed terrace of the Ange. Oh, and I left the car at home.

Yours in baggy trousers,

Ahem We have all been spending more time in the[...]